Weihenstephan is known for being the oldest brewery in the world. In year 725 the Benediktiner Monastery was founded on the Weihenstephaner hilltop. Here the monks invented the brewing of beer and in 1040 the Klosterbrauerei Weihenstephan was officially opened. During the next 1000 years the monastery went through many difficult times. Weihenstephan was ran over and destroyed amongst others by the Swedes, French and Austrians. Besides that, the monastery burnt completely down four times. Even the heavy earthquake in 1348 and three plague epidemics did not make the monks give up! Unfortunately, in 1803 the monastery was closed and all the interiors and property rights went into the hands of the State of Bavaria. However, the brewery business was under the control of the Royal Staatsgut Schleißheim (district of Munich) and could therefore continue. In 1852 the Bavarian Brewery School moved from Schleißheim to Weihenstephan where the art of brewing is still taught. Today, the location is the centre of the brewing technology in Germany and even worldwide. 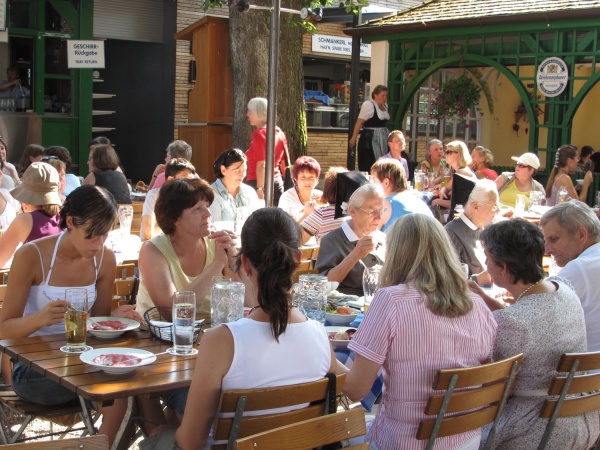 Apart from beeing the oldest brewery in the world, Weihenstephan is the birthplace of the "Obazda", a Bavarian cheese specialty. Katharina Eisenreich, the Innkeeper of the beer garden between 1920 until 1958, began serving homemade Obazda to guests, which soon thereafter became a traditional Bavarian dish that is sold in every beer garden today. Industrial production of Obazda, including export products, is still only done in Bavaria.

Besides the helles (lager) Bräustüberl Weihenstephan offers a wide selection of Weißbier (wheat-beer). A Maß Helles costs €5.80 and a half-litre of Weißbier costs €3.10.

The Bräustüberl Weihenstephan beer garden is open daily from 10am until midnight depending on the weather from April/May until September/October. Additionally, there is a drinks shop in the large factory building next to the parking lot over the road where the various beer types and souvenirs can be bought. The shop is open weekdays between 10am to 1pm and 1pm to 5pm.