Munichbeergardens.com is an all-in-one reference guide to the many great beer gardens in the Munich area. Whether you are a visitor in town exploring some of the famous beer gardens in the undisputed beer capital of the world, or a seasoned beer garden goer looking for a change of venue, this guide has something to offer everyone's personal taste and preference. The printable Google maps on each beer garden page are useful for navigation while beer garden hopping by bike or foot. 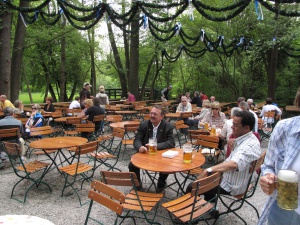 Beer gardens originate from a 19th century Munich when they became popular venues during the rule of King Ludwig I of Bavaria. At this time, a dark lager was the most common type of beer. On order of the king, beer had to be brewed during the winter months, because fermentation of this particular type of beer had to occur between four and eight degrees Celsius. So that the large Munich breweries could also sell their beer during the summer, they built cellars along the banks of the Isar river for storing the beer. To further reduce the cellar temperature, they covered the banks in gravel and planted chestnut trees to provide shade during the hot summer months. Soon thereafter, beer cellars were used not only to store beer but also to serve beer as well as food to the public. Simple benches were placed amongst the trees of these so-called beer gardens which quickly became popular amongst the Munich population. However, this new trend soon had a detrimental effect upon the smaller breweries and restaurants which led them to collectively petition King Ludwig to forbid beer cellars from serving food to the public. A royal decree was consequently passed, preventing all beer cellars in and around Munich from serving food. Instead, the guests of the beer gardens were permitted to bring their own food. While the law is no longer in effect and as all beer gardens now serve food as well as beer, the Bayerische Biergartenverordnung states that "real" beer gardens should still allow their guests to bring their own food.