Difference between revisions of "Sausage salad"

A sausage salad (Wurstsalat) is a favourite meal in the south of Germany, but also in Switzerland and Austria. The slightly sour salad, which is prepared with vinegar and onions, is a refreshing alternative to the otherwise partly heavy beer garden food. Due to its simple and fast preparation, a sausage salad can often be found in the picnic baskets of beer garden visitors. 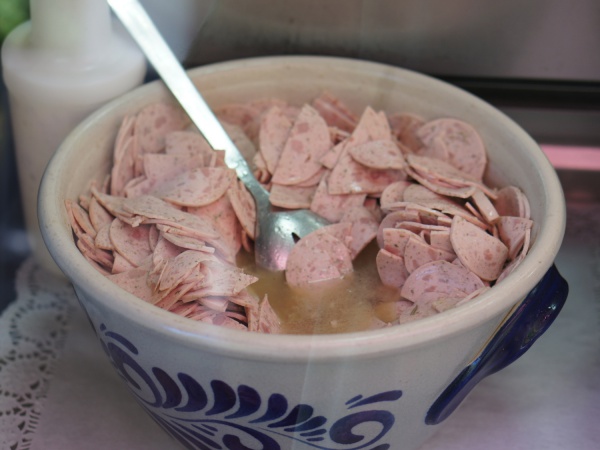 Skin the sausage and cut in thin slices. Cut the onion(s) into thin rings. Thereafter mix the sausage and onion slices in a bowl. Spill a vinaigrette of oil, white wine vinegar, salt, pepper and sugar over the mix and stir carefully. Cover the bowl and let the sausage salad rest in the fridge for minimum 30 minutes.

Before serving, slice the chives in small tubes and spread over the sausage salad. Place the pickled gherkins as decoration on the edge of the plate. Bread is usually served along to a sausage salad.