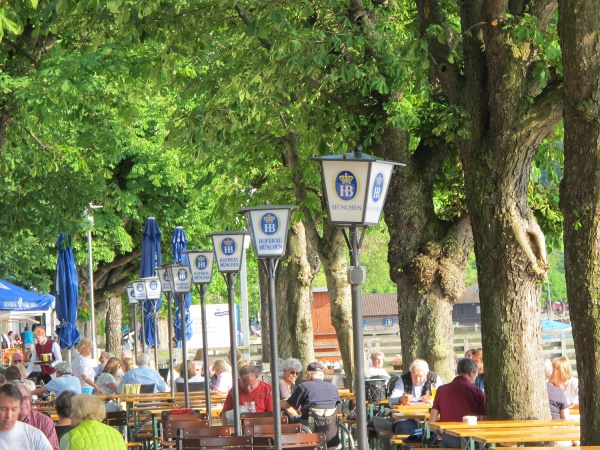 The beer garden has about 600 seats in the self-serviced area and about 200 seats in a serviced area. The traditional beer garden benches in the self-serviced area are shaded by an alley of large chestnut trees. Regardless of where to sit, each table offers a great view onto the lake with a spectacular mountain panorama on the horizon on clear days. The beer garden is well-visited especially during lunch time. The food stall of the self-serviced area offers typical beer garden meals, such as Obatzda, Wurstsalat (sliced sausage salad), Hendl (roasted chicken) and Spätzle (Bavarian cheese noodles). The main restaurant is well known for its fish specialties. All ingredients used in the kitchen are from the region. The fish comes from the fish farm Wiegel in Landsberg and the fishery Rieger at the Walchensee. Seehof Herrsching has won several awards for regional specialties, including bronze in the Bayerische Küche 2010. The beer served is Hofbräu and a Maß Hell costs €7.10 (May 2018).